A unique but disappearing community of migrant market gardening families on the western outskirts of Melbourne is the subject of a remarkable new book by Bangladeshi-Australian photographer Imran Abul Kashem.

The book tells the story of the European migrants who turned a rough crescent of land at South Werribee, amid dry native grassland, into a fertile oasis and the source of most of Melbourne’s green vegetables.

It is also a visual representation of the age-old migrant story of struggle, success and generational transformation; as peon migrant communities are absorbed into mainstream society and their children take up new professions. 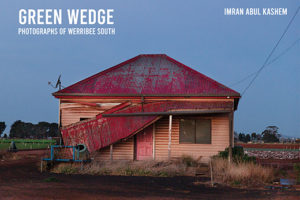 ‘Green Wedge, Photographs of Werribee South’ took four years to complete and its 60 pages of pictures were selected from more than 2000 images.

On the surface it is a book of farm pictures but on an artistic level it is intrinsically an intuitive study of migration and multiculturalism.

“I focused on two main themes. Firstly the changes to Werribee South with the advent of Wyndham Harbour and the creeping urbanisation of the area,” Imran said.

“With land prices going up, we’ve seen some farmers selling up and others refusing to – so there’s been a tension at work there,” he said.

“Secondly, the project fascinated me because my grandfather was a farmer in Bangladesh but my father didn’t want to be a farmer and became a civil engineer instead.

“The same thing is happening in Werribee South. As some of the older farmers are passing on, there’s a generational shift happening. Their sons and daughters are not taking over the farms but are selling them or leasing them to other farmers.

“I wanted to capture images of this unique but disappearing community. Melbourne city is slowing encroaching on the agricultural land here – which in itself has a profound multicultural story.

“It’s a unique community nestled between Melbourne and Geelong but the way of life of the market gardeners and their family business is definitely under siege,” Imran said.

The area was first settled by servicemen returning from WWI who were given blocks of land under the soldier-settler schemes. Most started dairy farms which proved problematic because of a lack of water.

After WWII, migrants from Europe took up the land at Werribee South and established market gardens with the help of newly installed irrigation infrastructure.

A tight knit community of farming families emerged with the area supplying most of Melbourne’s green vegetables.

Imran says many of the families at first lived in converted railway carriages until they could afford to build homes.

One of these carriages still survives and is the subject of a planned future photographic project.

Imran’s images have captured the poignancy of the passing of time and the transformation of the area.

One image shows an old dilapidated and paint-stressed weatherboard house from the 1930s on one side of a road and a sparkling new housing development on the other.

Another shows how a new generation of migrants have come to the area with and image Karen Burmese refugees picking crops in the fields.

“Just as with the southern Europeans who came after the war, the market gardens still provide jobs for people who might not have a great command of English,” Imran said.

He said that the natural shyness of migrants proved a hurdle in collecting the images for his book.

“The faming families were reluctant to be photographed. They didn’t want to be shown in their dirty clothes and they were not sure why I was wanting to photograph them,” Imran said.

But over four years, some of the farmers began to trust him and understand what his project was about.

“I had a hard job at first getting on to the farms to take pictures but now many of these people are my friends and when the book was published the dynamic changed completely,” he said.

One of Imran’s favourite images is of Sicilian farmer Tony and his three sons.

“They are passionate farmers. They still sell their artichokes and broccoli and beetroot at farmers markets,” he said.

“Another farmer I photographed, John, has a son who keeps telling him he should sell his property and that if he does he won’t have to work.

“But John doesn’t want to sell. The farm is his life and hard work is all he has ever known. His father started the farm, so there are three generation of history there,” Imran said.

Another photographic essay by Imran is a playful study of the ornaments that people put on their dashboards or rear view mirrors.

Titled ‘Same/Different’ the book is a collections of religious iconography, kitsch, sports and entertainment merchandise, fluffy dice as well as general tack adorning motor vehicles around where he lives.

It is also an intrinsically multicultural study with about a dozen version of God featuring among the images.

“As an artist, I wanted to tell my story, what I see, what I feel, where I come from. So farming is my story because of my grandparents. But like all of the people decorating their cars, multiculturalism is my story too,” he said.

His story – often alluded to in Imran’s photography – begins in the city of Barisal, in Bangladesh. Born the youngest of five boys and one girl, Imran was the son of a civil engineer working for the Bangladeshi government.

“Every two years we moved to a different town, usually in a rural area,” Imran said.

“In Grade 9 we moved to the capital Dhaka and I was sent to Notre Dame College – the most prestigious in Bangladesh. It was a big deal for me,” he said.

While studying mathematics at university, Imran became interested in journalism, photography and film; and he began writing for the university newspaper.

This led to jobs with some of Bangladesh’s leading news outlets and ultimately the reason that he decided to migrate to Australia.

“Politics in Bangladesh can be corrupt at times and I was writing about this as a newspaper reporter. This lead to threats from political parties,” Imran said.

“My mother was very worried about me so she supported me financially to migrate. I had choice of either the UK or Australia and I chose Australia because the cricket team was winning everything at the time,” he said.

Imran came to Australia in 2008 as a student and completed a diploma in Automotive Studies that would complement his Maths degree.

But like many migrants he struggled to find satisfying work and ended up as a kitchen hand.

“I was in a bad way. There were lots of tears when I thought about what I had given up in Bangladesh,” Imran said.

“But all the while I was thinking about what I really wanted to do with my life. I was earning money but my job was giving me no pleasure and there was nothing creative about it – which was what I craved,” Imran said.

“I knew there were three things I was passionate about; writing, film and photography – and all of these are essentially story telling.

“I didn’t have the English proficiency to allow me to be a writer in Australia and making films involved too much money.

“But with the coming of digital photography, this was something I could afford to get involved in.

“Photography is a universal language; anyone can read your stories. So I realised I could tell stories through my camera.

“I started studying and completed a diploma and other courses and gained knowledge. But maybe just as importantly, I gained a network. Through my studies I got to know some of the best photographers in Australia,” Imran said.

He started taking digital photos in 2011 and began working as a professional photographer in 2015, finally completing his studies in 2018. His Werribee-based business is called ‘Westend Photography’.

“I’m more interested in photography as an art but I realise I need to make a living,” Imran said.

He is much in demand as a corporate, events and portrait photographer but he says it can be difficult.

“You cannot ring up and get an amateur plumber to come and fix your drains. But our industry is different. Everyone with an iPhone and some basic software is a photographer,” Imran said.

“But I eat, sleep, breathe and cry photography and fortunately enough people seem to think that makes a difference to the end product,” he said.

“In my photographic journey, I have lived in two different worlds.

“I work as a commercial freelance photographer where I earn money to make a living. It’s a very competitive and challenging market.

“And being migrant is not easy in this industry – although sometimes is an advantage age as well when companies are looking for photographers who have a diverse cultural background.

“Then, in my personal work – documentary and travel photography – I’m just working for myself, not for money.

“All of these stories are part of my personal journey. They are based on the way I see and feel the world.

“This gives me the freedom to tell stories I think are important visually; and my migrant background certainly influences that and it helps me tell these stories differently than perhaps how others might,” Imran said.