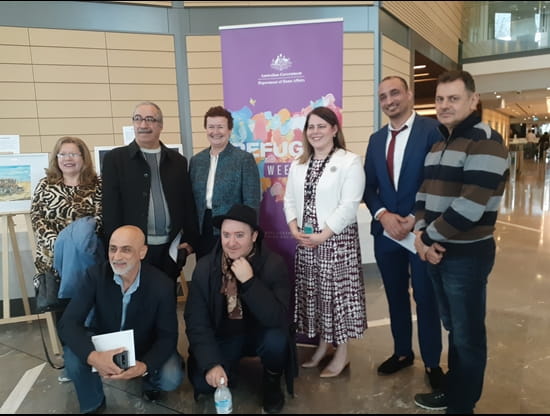 AMES Australia has partnered with the Department of Home Affairs to create a stunning art exhibition to celebrate Refugee Week 2022.

Nine artists from refugee backgrounds each produced works for the exhibition around the theme of ‘healing’.

The exhibition was launched at an event at the Home Affairs building in Melbourne this week.

AMES Australia CEO Cath Scarth said it was fitting to focus on art during Refugee Week.

“Art is something that unites people at a time when there are record numbers of people displaced across the globe currently because of war, conflict or persecution,” Cath said.

“And marking Refugee Week this year is important and timely as the war in Ukraine and other conflicts across the globe have pushed the number of people fleeing war, violence and persecution to more than 100 million for the first time in history,” she said.

“The wellbeing of these people who have fled their homes across the world has been made even more precarious by the COVID-19 pandemic and the current global economic and food crises.

“But the good news is that humanitarian settlement programs are beginning to open up again around the world as the effects of the pandemic recede,” Cath said. 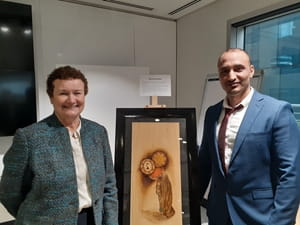 Afghan artist and exhibitor Mirwais Janbaz told the event of his twenty-year journey as a refugee.

After fleeing Afghanistan, Mirwais and his family spent 20 years living in limbo in Pakistan uncertain of their future and fearing they would be forced to return to their war-torn homeland.

To make a living, Mirwais took painting and drawing commissions from people, including embassy staff, who liked his artworks. He and his family arrived in Australia as refugees in 2018 and now live in Melbourne’s south east.

“I am grateful to be in Australia and to finally have an identity and a place to call home,” he said.

The exhibition runs throughout Refugee Week in the lobby of Casselden Place, 2 Lonsdale Street, Melbourne.