An AMES Australia client who was shot in both legs during the Burundian civil war leaving him with serious disability has gained vital National Disability Insurance Scheme (NDIS) funding thanks to support from AMES staff in Mildura.

Jean Claude Nsabimana has been granted almost $150,000 to help him and his family rebuild their lives in Australia.

He worked as a bus driver and taxi driver before conflict broke out in his homeland.

During the violence, gunmen broke into Jean Claude's home and shot dead his brother. They also shot him in both legs, with one requiring amputation.

When the gunmen left, Jean Claude's wife Dancila contacted the Red Cross who were providing humanitarian aid and medical support within his local community.

Jean Claude spent two weeks in a Burundi Hospital and was then flown to Rwanda for further medical care. He and his family spent two years in Rwanda before languishing in a refugee camp in Kenya for another two years.

Jean Claude, Dancila and their four arrived in Australia November 2019. 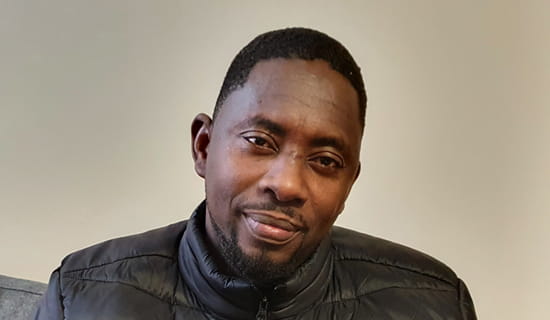 AMES Australia Team Leader in Mildura Jason Minter said that since arriving in Australia Jean Claude and his family have been supported to obtain affordable long term housing and complete the AMES Orientation Program.

“Jean Claude and Dancila are attending AMEP classes and their children have been enrolled to learn English at Mildura English Learning Centre," Jason said.

“We also initiated referral on behalf of Jean Claude to access NDIS supports.  We worked closely with Jean Claude and local NDIS planners, including language support, to assist him to develop service and support plans," he said.

“He is very involved within local Burundian community Church, delivering sermons with the support of the church Pastor. He also wants to pursue an opportunity study Theology after successfully completing his English Courses," Jason said.

“Jean Claude is also planning to obtain his driver's license with a view of establishing his own transport business in Mildura," he said.

Jean Claude said the funding would help him achieve independence and support his family.

“I would like to be able to build my domestic and social skills so I can build my independence," he said.

“I would also like support to enable me to increase my mobility to allow me to provide for my family," Jean Claude said.

This update is written by AMES Australia Media Team.