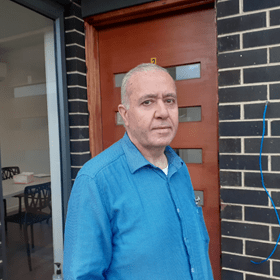 Syrian refugee Yousif Kawerma is a poster boy for successful refugee settlement.
This month, he and his family moved into their own home in Melbourne’s northern suburbs and he started a new job as an aircraft maintenance engineer with Qantas.
His three daughters are all studying at university are looking forward to establishing careers.
Yousif’s circumstances are a far cry from five years ago when he was forced to flee his home and job as a power plant electrical engineer because of the conflict in his homeland.
He credits AMES’ Skilled Professional Migrant Program (SPMP) and Career Pathways Pilot (CPP) for his success.
After a year in Lebanon, Yousif and his family were granted refugee status in Australia, where they could be safe and start to build a new life.
Yousif was given a flyer about AMES’ career pathway programs by a UN representative in Lebanon, encouraging him to try use his engineering expertise in Australia.
Yousif arrived in Melbourne in June 2018 and has been supported by AMES’ career counsellor, Drue Vickery.
“At first it was very hard to get a job in Australia. It was easy enough to search for a job and I was getting interviews. But I was not doing well in the interviews and my lack of local experience was a barrier,” Yousif said.
“It was then that Drue helped me so much. And the SPMP course helped me to understand how to write a resume and how to conduct yourself in an interview,” he said.
“This gave me the confidence to keep applying for jobs. I decided to apply for jobs as a technician and not an engineer – to focus on what I know and not the certificates I have,” Yousif said.
His first job was with Australian Calibration Services as a calibration technician. Now he has scored his ‘dream job’ with Qantas.
“I am working on the calibration of aircraft instruments and the tools used to service aircraft,” he said.
“I feel like my journey from Syria is complete. Now everything is good,” Yousif said.
In his previous life, Yousif worked as an engineer at a power plant in the town of Mhardeh, a community of 20,000 people in western Syria.
Many houses and businesses in the town were shelled, including Yousif's parents' home.
Eventually, Yousif and his family had to flee their town and travelled to Lebanon to seek temporary safety.
"I am so thankful to Australia for giving me safety. I really hope that I can use my skills to contribute to the Australian economy", he said.
Drue said Yousif’s story shows the positive impact programs like the SPMP can have.