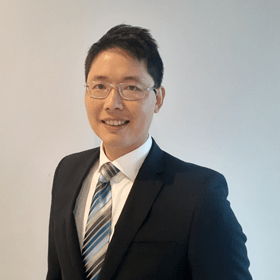 Kevin worked as a barrister in Hong Kong for 17 years and arrived in Melbourne in early 2020 just before the COVID lockdowns.

“We came to Australia for few months and we were stranded here. We had planned to move to Australia because my wife is a citizen, but not until this year. COVID effectively pushed out plans forward," Kevin said.

As a lawyer from Hong Kong, which shares a similar legal system to Australia, getting his qualifications recognised was not as difficult for Kevin as it is for professionals from other countries.

But he had to pass an IELTS professional English language test and also complete courses in constitutional and federal law.

Having completed the courses, Kevin was admitted to practice as a solicitor. It was then that Kevin turned to the SPMP course to help him find work in Australia.

“I was introduced to the program by a friend and I got the last place in the September course," Kevin said.

“The course was very useful in the sense that it guided me through the process of creating a CV. As a barrister in Hong Kong, I had never had to do that," he said.

“We had online seminars that were full of information and I found the mentoring program very useful. I have kept in touch with my mentor and I have met her face to face.

“I think the program for me was very good in the sense that it forced me to do something with real goals and timelines.

“In the first week we were tasked with finding a job online. We then had to tailor our CVs to those positions.

“I chose a couple of positions and wrote applications. I got an interview here at Canaan Lawyers and secured a job. I've been here a month.

“I'm looking forward to building a career in here in Australia and familiarising myself more with legal sector the workplace culture," Kevin said.

Kevin said he would encourage other professional migrants to pursue their professions after moving to Australia.

“A lot of people, especially from Hong Kong, don't follow their professions here in Australia. They find it too hard and go and do other things," he said.

“I would say to them take up the challenge and don't be afraid to go back to your profession," Kevin said.