Mentor to migrant makes all the difference 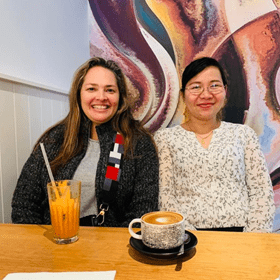 A new migrant and her mentor have formed a strong bond forged through the difficulties of COVID lockdowns and uncertainty about the future.

“It’s really good. I am enjoying it and a casual role suits me because I have young child,” Thao said.

Originally from Vietnam, Thao and spent five years in New Zealand before moving to Melbourne in 2019.

“I took the SPMP course to improve my job prospects. As part of the course, I was given a mentor Blanca who helped me a lot,” she said.

“Blanca coached me through the COVID-19 period. I arrived in Australia and was looking for a job and then COVID struck and I was worried.

“When I talked to Blanca my mood was boosted. She is a migrant herself and she understands the psychological ups and downs of being a migrant. So she helped me to stay positive through COVD.

“She helped with applying to job ads and everything else related to job seeking. There were many ups and downs when I was looking for a job; it was quite emotional and I panicked a bit. But Blanca helped me to make the right decisions.

“We still keep in touch. After I got my job I am still in touch and still ask her for advice.

“I’m really happy to have got this job teaching because it is my passion.

“The SPMP course was really helpful in achieving that. It is good because it is strengths-based and builds on the skills and abilities you already have – and, of course, it introduced me to Blanca,” Thao said.

During the course Thao also volunteered with AMES facilitating an English group for migrants. During the lockdown Thao and Blanca connected through fortnightly Zoom sessions.

SPMP mentor Blanca, who works in education for the Victorian Government, said her work Thao was “rewarding”.

“It was great to see her development over two years. To see where she is now and having a baby in between,” Blanca said.

“She was very flexible and adaptable and had an understanding of the context she found herself in. I was happy to help her with the process she went through to focus on her career choices,” she said.

“And it was interesting to see her put all her energy to try to find a job.

“Now she is doing great. She has a flexible job which allows her to look after her baby,” she said.

Blanca said she drew on her own experiences as a migrant from Venezuela to support Thao.

“I was able to use my experiences as a migrant to be able to help Thao understand and overcome the hurdles she faced using a wellbeing approach,” she said.

“I tried to help her understand that that when she was rejected for a job it was not a failure, it was all about learning.”