Persistence pays off for refugee engineer 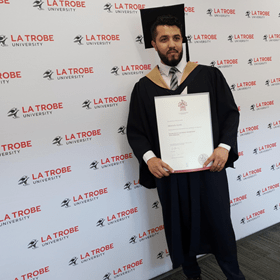 Mustafa Ayobi arrived as a refugee from Afghanistan as an 18-year old with no English, little formal education and knowing no one outside his immediate family.
This month, after 12 long and difficult years of work and study, Mustafa fulfilled a life-long ambition when he started his first job as an electrical engineer.
He is working for Melbourne’s Metro Trains designing and building electrical substations in what he says is his “dream job”.
Mustafa arrived from Afghanistan with his family in 2008 fleeing his homeland’s interminable conflicts.
He had reached safety but a formidable journey lay ahead.
“I studied English at AMES Australia’s Noble Park language school and then I went to Minaret College in Springvale,” Mustafa said.
“I was 18 but in Year 10. I had language barriers and it was really hard. All of the other kids in the class were younger but were doing more advanced work than me,” he said.
“After Year 12 I was accepted into La Trobe University to study engineering,” Mustafa said.
“I was the first person in my family to go into higher education but now my younger brothers are following in my footsteps. I am proud to be a role model for them,” he said.
Mustafa faced challenges and barriers completing his degree; his friends and even his teachers tried to discourage him from following his dream.
“A lot of my friends told me to give up on school. They had jobs and new cars and tried to persuade me to join them and get factory work,” he said.
“And there were times when I was worn down and about to give up but luckily, I didn’t.”
Mustafa took six years to complete his degree, having to fit in part-time work to support his growing family; Mustafa and Yalda have two children - daughter Hafsah and son Habil.
“After university, I spent 12 months looking for my first engineering job. It was devastating. Some of my friends even said ‘what was the point of all that study’,” he said.
Mustafa joined AMES Australia’s refugee support and mentoring programs where he was guided though the steps he needed to take, gaining knowledge of the engineering sector, resume writing and interview techniques.
“This was really helpful to me in understanding what it takes to land a job,” he said.
Recently Mustafa started his job at West Sunshine, in Melbourne’s west. He rises early each morning and makes the 50 kilometre journey from his home in Noble Park, in the city’s south east.
But he’s happy to put in the miles.
“My dream was always to be an engineer and now I’m living it. Sometimes even I can’t believe this has happened after all the difficulties I’ve faced,” Mustafa said.