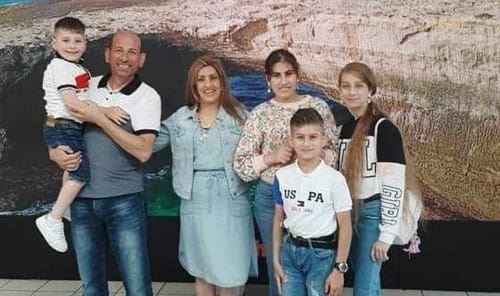 A refugee family with three children with disabilities have been supported by AMES Australia to settle in Melbourne after a rocky start to their life in Australia.
Salam Mardali and Wasan Jabbo and their four children arrived in Australia in November 2019 settling in western Sydney. They had fled their home in northern Iraq in 2014 when ISIS attacked.
But as they struggled to find support for their children, the couple questioned their decision to come to Australia.
After less than three months in Sydney they made a move south and have found the support they need in Melbourne.
In Melbourne the family became clients of AMES Australia and were connected with critical services.
AMES Case Manager Rita Betto said the family had struggled to get NDIS approvals and find appropriate medical care.
“Salam and Wasan were very distressed and overwhelmed in their parenting roles when they arrived in Melbourne not knowing what services were available," Rita said.
“But we were able to support them to navigate the NDIS and connect with the Royal Children's Hospital," Rita said.
The children were also connected with suitable local schools and child care facilities.
And the family was supported with orientation sessions to help them navigate life in Melbourne; also, they were supported to find housing and to access benefits and local community services.
Salam and Wasan are now learning English and their children are settled in schools.
Their youngest son Youhan, 4, has speech problems but with support organised by AMES he is improving and can now speak in sentences in both English and Assyrian.
His older sister Tara, 18, has been enrolled in a special school in Craigieburn, in Melbourne's north, where the family now lives.
Another sister Tamara, 16, is thriving at school and has dreams of becoming a surgeon.
Salam says he is optimistic about the future.
“My family is in safe hands in a safe country where there is respect for everyone and no persecution. My kids have the support they need and are in school," he said.
Wasan plans to open a hairdressing business and Salam is aiming to find a job.