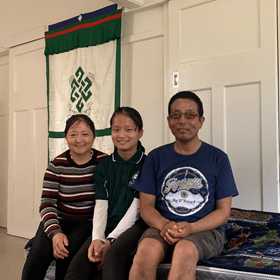 After decades living precariously as exiles in India, a Tibetan refugee family have found a home, a future as well as a healthy and peaceful life in regional Victoria.
Dorjee Sonam and wife Dolma have both found jobs in Mildura, in Victoria’s north-west, and their two children are on educational pathways that would have been impossible just two years ago.
The Sonams spent a difficult year languishing in Melbourne unable to find work and uncertain about their future after arriving in Australia as refugees in late 2018. They came under the Humanitarian Settlement Program (HSP) funded by the federal government's Department of Social Services.
The family was supported to settle in Mildura by migrant and refugee settlement agency AMES Australia. Now, after nine months in Mildura, both parents have found work at a local nursery and the warm Mallee weather has improved Dorjee’s health.
“In Mildura, we were able to get jobs without good English so it is better for us than Melbourne,” Dorjee said.
“We have bought a car and things are getting better and better. Eventually we plan to buy our own home,” he said.
“If we were still living in Melbourne we would be relying on Centrelink because it was hard for us to find work. We want to stand on our own feet, so here in Mildura we have found work and we are confident to stay here,” Dorjee said.
Son Tenzin is 16 and studying Year Ten.
“I love school and I have made friends. There are some kids who speak Hindi, which I speak, so we get together sometimes,” Tenzin said.
“I particularly like maths and eventually I would like to become a police officer. My sister and I are both doing well with our education,” he said.
Daughter Choesang has recently completed a Certificate III course in ‘Individual Support’ and hopes to study nursing in the future.
“My teacher is helping me find work in aged care or personal care but my dream is to continue studying nursing,” she said.
Dorjee and Dolma fled Tibet in 2000 because of the political and religious persecution that has been directed at the Tibetan people since the region was annexed by China in 1951.