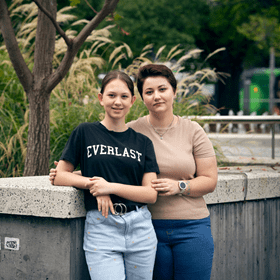 Two Ukrainian sisters have found refuge in Australia after braving bombs and snipers in a desperate journey to safety.
Yevheniia Cherkasova, 24, and her sister Alexandra, 14, fled besieged Kharkiv as Russian tanks attempted to encircle the city.
After surviving bombing and missile strikes, the sisters were put aboard a train by their parents in the precarious hope they would reach safety.
Now safe in Melbourne, they are being supported by refugee settlement agency AMES Australia through the federal government’s Humanitarian Settlement Program.
The sisters have told of the human, economic and emotional toll the Russian invasion has taken on themselves and their beleaguered nation.
“I thought maybe it was fireworks but far away. But then they started to bomb the city centre and we knew what it was. It was the Russians attacking us,” Yevheniia said.
“At 5am in the morning and we all woke up. We heard loud noises from the street. There were explosions not far from us – maybe 10 kilometres away. At first we didn’t think it was war but then there was a factory explosion and when we read the news and we realised it was war,” she said.
Yevheniia’s parents sent her and her sister away on March 13 after a missile hit houses across the street from their apartment.
“Our parents put us in the car and drove us to the railway station. They put us on a train to Lviv in the west of Ukraine and then we made it into Poland,” she said.
A family friend who has lived in Australia for a decade reached out and suggested the sisters come down under.
“Melbourne is a beautiful city and very peaceful. We were very scared and so we are happy and grateful to be here,” Yevheniia said.
“We are grateful to the Australian Government and the Australian people and AMES for giving us a safe place to live,” she said.